What people haven’t realized yet is that all this political shit is not going to stop. Everyone is too caught up in the moment and chaos. The Clinton side will continue to blame the FBI and Russia for the election and Trump will not stop being a total jack ass. The deep state including the intelligence departments will do what they can to hold onto what they have and keep the war gears grinding.

Confidence is failing. It is no longer a United States. U.S government long term bonds (our debt) has been in a 35 year bull market. This debt cycle is coming to an end as confidence erodes at a faster rate. The two go hand in hand. More on the end of the bond bull market and what it means below.

Within the next 16 years we will likely see at least one state leave the union as capital flows move toward China.

Nobody (including myself) is really understanding the role they are playing in all this.

Trying to find a news source you can consistently trust is next to impossible. If an important item comes out in the news it may take another 20 minutes to scout around to get the complete context, understand how much of it is real and wonder what agenda could be behind the release.  Who’s got time for that?  It’s a lot easier just to let your emotions flair up.

Going back to bonds. Retries are told to keep the majority of their savings in bonds. The Social Security fund is required by law to be invested in non-marketable securities issued and guaranteed by the “full faith and credit” of the federal government.

Due to bond duration (a bonds sensitivity to interest rates), the 10-year and 30 year government bonds will take a large hit if interest rates move just 2% higher.

Example: “For instance, if interest rates were to rise by two percent from today’s low levels, a medium investment grade corporate bond (BBB, Baa rated or similar) with a duration of 8.4 (10-year maturity, 3.5 percent coupon) could lose 15 percent of its market value. A similar investment grade bond with a duration of 14.5 (30-year maturity, 4.5 percent coupon) might experience a loss in value of 26 percent1. The higher level of loss for the longer-term bond happens because its duration number is higher, making it react more dramatically to interest rate changes.”

The bond losses are going to effect a tremendous amount of people. We are going to soon have a large “Oh shit” moment as Martin Armstrong likes to say.

I’d advise people to do the best they can to check their emotions do NOT align yourself with either Dems or Republicans so you can try and keep a more objective view to see what is unfolding.  Easier said than done.

As Trump’s cabinet fills out and markets price his administration’s economic impact for perfection, investors have to wonder if the new team can actually deliver.
Asia and economic expert Eamonn Fingleton, the only other analyst I know of predicting a Republican/Trump victory back in February, has some sage insight and advice for America’s tough road ahead.
In short, Fingleton identifies Trade and Immigration as the key issues for American voters and the economy. Pundits failed to give these issues proper consideration during the election (thus missing Trump’s appeal), and will likely continue toeing the corporate-establishment line of free trade orthodoxy. This would be a massive mistake.
A more recent Fingleton interview reveals that:

Though Trump may be able to storm his way through transnational trade agreements, demolishing any legal defenses against a more autarkic, protectionist US trade regime, the level of domestic investment and coordination necessary to re-industrialize presents a daunting challenge. Though the historical precedents of post-WWII Germany, Japan, and even China provide examples of success, some level of great power war, foreign invasion, and widespread destruction came first (a subject for another day).
For the time being we’ll let the qualified hypothesis stand, that a return to America’s days of industrial-trade greatness will not be a smooth transition. At best, we’ll see a euphoric blow-off in US equity markets, as masses of money flee negative/zero rates abroad, and rising rates in the US, to chase hopes of fiscal stimulus and “war bride” re-armament in the United States. As we’ve seen numerous times throughout history, however, the realities of trade and real war are no good for the average investor’s returns, much less the national economy.
TickerTruth Major Assets reflects many of these themes:

The Invesco Value Municipal Income Trust (ticker: IIM) has had a big sell off recently along with treasuries and other bonds.

I think this closed ended fund is now oversold.

IIM is trading at a discount of 11% to it’s Net Asset Value.  That is like paying 89 cents for a 1 dollar bill.  Buying the fund will also net you a 5.21% tax free yield.  Because this is a muni fund you do not have to pay federal income taxes on the yield.  You will be hard pressed to find this type of deal anywhere.

The fund will likely bounce off the $14 level.

Buying the fund allows us to collect a great dividend with limited down side.  Please use a 18% trailing stop as well as sell if it drops below $13.90.

I highly recommend watching this. Porter Stansberry explains why stocks are over valued today when measured bye enterprise value (adding on corporate debt and subtracting cash for the market cap). He believes the corporate bond bubble is worse than the 2000 tech bubble. 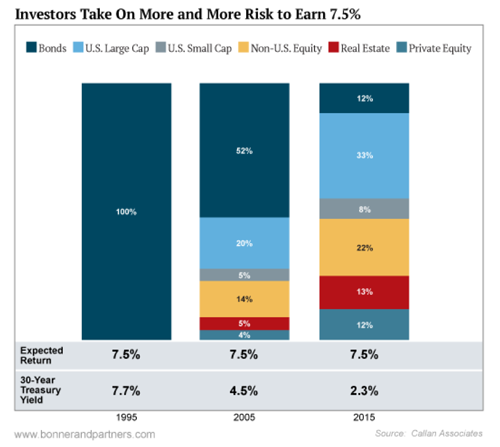 My friend known as ‘Da bear’  has been doing wave counts on long term U.S bond rates.  We are both of the opinion we will see a blow off top (that is one last push for lower bonds) before the trend reverses.  U.S bonds have been in a bull market for over 30 years now.  How many more years do you believe it has?  I think long dated government bonds are the true macro distorted bubble we are seeing in the western world.  We use treasuries for the bases of credit for damn near everything and when the trend changes so will the world financial structure.

The German bund just went negative for the first time.  Watch below:

Would you pay your government to loan it money?  I most certainly would not!  I would rather have cash, gold, stocks… hell I would rather buy baseball cards!

Let’s get back to Da Bear’s wave counts:

I lifted these directly off of Da Bear’s FB page.  He doesn’t even have a profile or background image for his page which amuses me. If you have any questions regarding his counts just visit him on his FB page or in the message board.  He’ll respond to you, he loves this stuff.  He has wave counts for just about everything.