His mother was upset he went into law, so he dropped the occupation and went to work at a counting house (bank), however he proved to have no business skills and that job was soon over.  His father lent him money to start a business to which all of the loaned money was lost.   He finally ended up working at at his fathers brewery but he was more interested in politics and the injustice of taxation at the time.

Samuel Adams would of course go onto be a revolutionary and one of America’s founding fathers.

Flash forward to 1985 and James Koch and Rhonda Kallman offered Samuel Adams Boston Lager as a tribute to the revolutionary hero.  The Boston native started brewing in his kitchen with a recipe that went back for generations in his family.

You know of the signature beer of the Boston Beer Company ($SAM), however you may not know they also own brands such as Twisted Tea, Angry Orchard, and Truly Spiked & Sparkling.

I haven’t given a stock recommendation on Tao Economics in a while, partially due to being very busy these days (who isn’t) and also I am a fan of saving some dollars at the moment due to an overall expensive market and cracks showing in the credit markets.

In short, I’m being patient and looking for companies that have a strong balance sheet, that are not going anywhere, and have broken out to the upside.

We have found the perfect candidate with the Boston Beer Company. Lets start with the balance sheet. 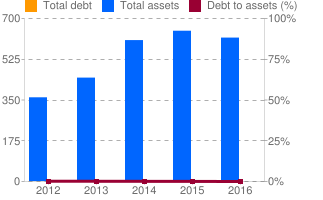 I like to turn to the google finance for a quick visualization of a balance sheet.  As you can see above the debt to asset ratio is nothing.  They released earning for Q2 on 07/27 and the market was happy as margins increased along with a slight increase in revenue.

This company doesn’t need to worry about the credit markets rolling over and they have over $71 million in cash as they had $61 million in cash from operations this quarter.  In short they have no issues covering their liabilities.

The company does not pay a dividend, however they did retire $88 million worth of shares and they have a history of buying back and retiring shares, which effectively increase the shares value.

The full 2nd quarter report can be found here.

So is the stock cheap?  It’s current P/E (price to earnings) ratio is at 22 for the year.  That may sound expensive for value seekers, but consider the S&P is currently at 24 and over the last 10 years the companies PE ratio has been as high as 63 and as low as 16.7.  We are leaning on the cheap side for this stock.  Other ratio’s also indicate the stock being cheap compared to it’s history.

If you don’t own any sin stocks, now is a good time to add this one to your portfolio as people drink no matter how the economy is doing.  So what’s the downside?  There has been heavy competition in the beer and cider industry.  We could see revenue’s decline again, but this is why we use a trailing stop.  If things turn really bad for $SAM down the road we know it will likely take some time to play out and our trailing stop will get out of the position before too much damage has been inflicted.

Recommendation: Purchase $SAM with a buy up to price of $170. Due to the low beta we will be using a 18% trailing stop loss and will be tracking it in our Tao Stock Tracker.